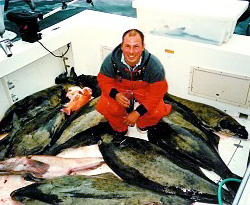 Sitka Alaska Fishing Captain Mike Boles, owner of Sitka Point Lodge and Fishing Charters, has over 30 years of experience in both commercial and charter fishing in Sitka, Alaska. His knowledge and familiarity means he knows the best places in Alaska to fish halibut and salmon.  Captain Mike sets the standard at Sitka Point Lodge and Fishing Charters by giving you the best Alaska fishing experience at a very reasonable price.

Meet the rest of the Sitka Alaska Fishing Crew 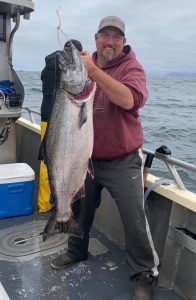 Mike is a 27 year resident of Sitka, and has spent 20 of those years as a quality leader in the charter fishing industry. He is exceedingly knowledgeable of the waters here in Sitka, and he knows exactly where to find the fish. Mike is a persistent, and dedicated captain whose main interest is taking good care of those who are on his boat.  He has consistently caught record breakers for Sitka Point Lodge in his 13 years with us, and we are proud to have him as a part of our impressive team. Mike is full of comedy and has a quick wit, so you will enjoy his conversation while you are waiting for that line to bend with fish. On his off time Mike enjoys photographing the ever scenic Sitka Alaska, and he is an avid outdoorsman who is always looking for the next great adventure. He also enjoys traveling and spending quality time with his family. 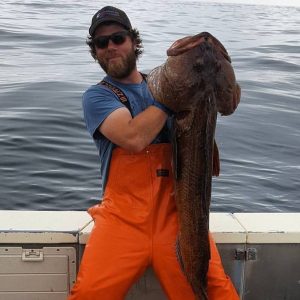 Brian has been fishing in Sitka Alaska for 7 years, and he is a year round resident. His experience began in the industry as a commercial fisherman, and he currently has been fishing for Sitka Point Lodge for 5 years. He is well known as a captain that lands the fish! Brian is also known for his great sense of humor and storytelling, make sure you ask him to share his adventures! He delivers the very best experience for his clients, and Sitka Point Lodge is proud that he is part of our impressive team. On Brian’s off time he is an avid outdoorsman, he loves hunting, fishing and exploring Alaska.

Eric has been in the fishing industry for over thirty years, he has been a commercial fisherman, a fly fisherman and a charter fisherman. Eric has been in Alaska for 48 years, and his knowledge in fishing is extensive. He even spends his time fishing in Thailand in the off season! Captain Eric will have plenty of adventures to share with you while you are waiting for that line to jump. Eric’s knowledge and professionalism will keep you landing fish every day you are on the water with him. We are proud to have Eric as a part of our impressive team.  Eric enjoys fly fishing, and the great outdoors on his time off, as well as quality time with his wife in Thailand. 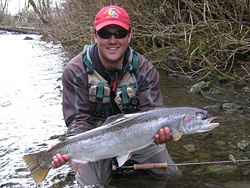 Fly Fishing in Sitka Alaska with Tad Kisaka.  Tad has been fishing since Snoopy poles towered over him. He has fished all over the country, and even tested waters abroad. He was introduced to fly fishing while attending the University of Idaho. It was on Idaho waters that Tad became addicted to catching fish on the fly. While at Idaho, he studied overseas in Australia.

After his schooling was completed, Tad traveled around Australia with a backpack and fly rod in tow. The most amazing thing about Australia was that he never knew what was going to be tugging on the end of his rod. On his way back to the States from the land down under, Tad stopped off in New Zealand and fished for steelhead on the Tongariro River.

After receiving his degree in fishery resources, Tad traveled around the Northwest for three months hitting some legendary rivers and lakes. He then landed a biologist position in Vancouver, Washington and learned to fish the Columbia River for spring Chinook salmon, shad, and sturgeon. Fishing has guided him to some incredible places and has fostered some life long friendships.

Although, he has fished across the country, primarily in the Northwest, the waters around Sitka exceed the beauty and fishing value of the other places to which Tad has traveled. He currently lives year round in Sitka, and loves it. He has been fishing in Sitka, Alaska since 1999, and is familiar with all the different runs of salmon and the timing of trout and char species. Tad invites you to visit him to do some fishing, and he’ll show you this magical place that he calls home.

Read what others say about their Alaska fishing experiences.